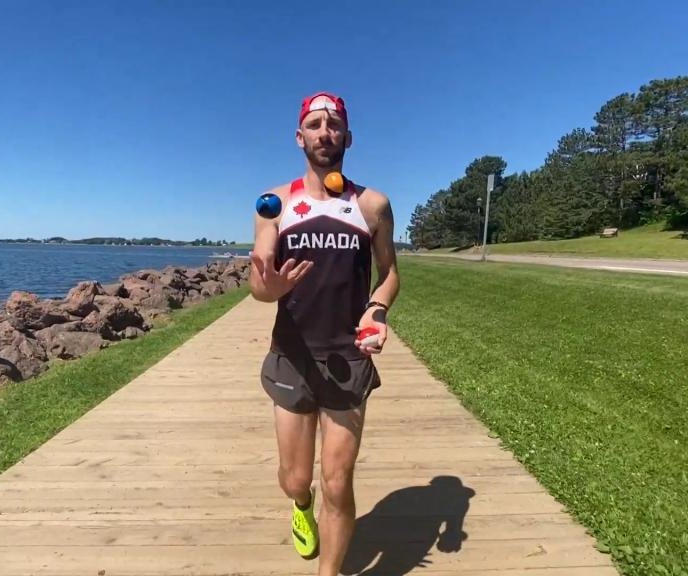 Michael Bergeron, a Canadian runner, recently submitted evidence to Guinness, hoping to be recognized for his new, although unofficial, record for the fastest 10-kilometer joggling. Breaking the word down, joggling is exactly what it sounds like, a combination of a jog, although more often a run, and juggling at the same time. Bergeron says that he started joggling in 2014 for his mental health and fun, eventually entering into a race after 3 months, in which he placed 4th overall. He also says that, with its unique nature, joggling makes him stand out while he’s doing it, making him more approachable and the “fun guy.” In his most recently submitted record attempt, Bergeron joggled 10 kilometers (6.2 miles) in a time of 34 minutes, and 47 seconds, beating the previous 36-minute, 27-second record by a full 1:40, although afterward, he stated “I feel exhausted, my feet are hurting, but super happy,” during an interview.

This isn’t Bergeron’s first attempt at this record either, as, in 2018, he joggled the same event with a time of 35 minutes and 36 seconds. While this should have been enough to earn him the record, a small technicality resulted in his disqualification. This didn’t discourage the athlete, however, as in October of the same year, he successfully earned his first world record, although not in the 10k, by joggling (3 objects) the fastest time in a half-marathon at Scotiabank Waterfront Marathon. Bergeron hopes that this record will be considered valid, as it was run on a measured track at the University of Prince Edward Island.