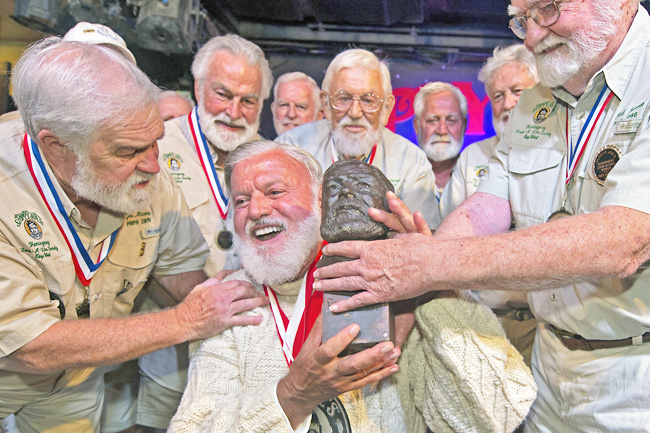 Ernest Hemingway, famous for novels including For Whom the Bell Tolls, was an influential writer on 20th-century literature, but few would expect his legacy to be honored by a look-alike contest, especially one that has been occurring annually for over 40 years. At Sloppy Joe’s Bar in Key West Florida, a place where Hemingway regularly visited during his residence there in the 1930s, Hemingway Days started in 1981. Initially, the three-day celebration involved a short story competition as well as a “Papa” Hemingway look-alike contest, as organized by the writer’s daughter, Lorian. Growing quickly, the event soon welcomed visitors from around the world, including countries such as Kazakhstan and Brazil, to compete in the competition. Judged by former winners, each contestant is given 15 seconds to speak, and while it is recommended that they have the appearance of Hemingway, it isn’t required. With the popularity of the contest, strict rules are in place, with a limit of eighty participants each of the three nights of competition, eight contestants on stage at a time, and only twelve advancing to the finals.

This year’s winner was named Jon Auvil, a 65-year-old attorney who decided to wear a cream-colored sweater, similar to Hemingway, which helped him seal his victory as the 2022 Hemingway look-alike. Although at first glance, the “Papa” Hemingway look-alike contest appears to be a friendly neighborhood meet-up, it is much more serious, at least for participants. 2022 was Auvil’s eighth year entering the event, and in it, he had to endure three rounds of competition, beating  123 other contestants to claim the title. Proud of his accomplishment, Auvil feels as if this success is well deserved, as not only does he look like Hemingway, with his heavyset build and white beard, but also shares other characteristics. When interviewed, Jon Auvil stated, “I think I feel most like Hemingway because of his relationship with his friends, his wife, and his children,” which he thinks caught the judges’ attention.

While certainly an interesting way to celebrate the life of a famous author, Hemingway Days in late July certainly is able to bring attention to Ernest’s life and literature.